A pipe burst by frozen water could cost homeowners and insurance agents up to $10,000 on average this year as rising costs for home repairs and building materials collide with another winter storm that descends on Texas.

According to insurer and AAA car club.

“The cost is going up right now for everything from fixing cars to copper wiring and drywall,” said Richard Johnson, a spokesman for the Insurance Council of Texas, a trade group in Texas. insurers. “Most of these things are covered by your policy, but it costs everyone more to cover.”

Insurance companies are warning homeowners to be prepared as snow, ice and wind chills ranging from -10 to 10 degrees are possible later this week.

The now-notorious winter storm of February 2021 accounted for 500,000 insurance claims worth more than $10 billion, according to Texas Insurance Regulators. Nationally, the storm that swept through the region cost insurers an estimated $20 billion, the most expensive winter weather event in history.

A similar event this year would cost even more.

It’s on all of our minds: how will this winter storm compare to February 2021?

No 2 events are alike. This one won’t be as bad in many ways, but we expect more ice, which means more dangerous road conditions. Icing can cause localized power outages. #dfwwx #ctxwx pic.twitter.com/uXgCZyT60Q

Last February’s winter storm showed just how hard the cold can be for Texas homes and homeowners who aren’t necessarily prepared for temperatures well below zero. Burst pipes were by far the most common cause of insurance claims last year and plumbers and construction crews were inundated with requests for repairs.

However, the precautions that the owners took last year were sometimes in vain in the face of the temperatures which dropped as low as 2 below zero in Dallas amid more than 5 million Texas homes losing power during a statewide energy crisis.

The ongoing COVID-19 pandemic and the economic difficulties of the recovery are adding new wrinkles to the preparation for the storm this year.

The cost of building materials, including lumber and plumbing parts, has risen dramatically due to supply chain issues, factory closures and worker shortages across the country, said Mark Friedlander, spokesperson for the Insurance Information Institute, an industry data company.

In Texas and across the country, it drove home insurance rates up about 4% last year and rates had been rising faster than inflation even before the pandemic, Friedlander said. Insurance rates have risen 25.6% since 2017, he said, largely due to rising home values ​​and the rising cost of repairs.

Texas ranks among the highest home insurance rates in the nation, at nearly $2,200 per home insurance policy, according to the Insurance Information Institute. The national average is $1,396. Texas rates are higher, insurance groups say, because the state has a unique mix of weather threats, including hail, wind, tornadoes and hurricanes along the Gulf Coast.

Forecasters expect mixed rain and snow later this week, which could lead to an ice storm similar to the one the region faced in 2011 when Arlington hosted the NFL Super Bowl.

An ice storm introduces a whole different set of household problems most locals haven’t faced in the past year, including ice dams on rooftops causing roof damage and electrical damage being caused by the water accumulated above the houses.

“Now is the time to prepare your home for the cold weather ahead,” Kayci Boggs, AAA Texas Claims Group Manager, said in a statement. “Taking small steps to ensure your home’s interior and exterior are ready can help you avoid high repair costs and headaches in the future. 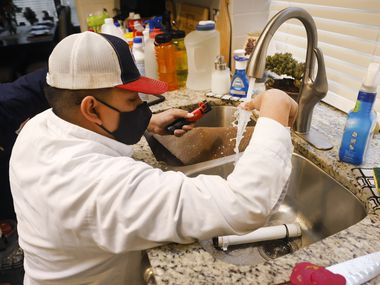 Mad Jack Chambers, World War II’s only archer. Published: Sat 30 Apr 2022, 5:22 PM In his Times Past column this week, historian Jonathan Smyth takes a look at Mad Jack Churchill whose mother was from Co Cavan… There was a touch of Errol Flynn about the swashbuckling persona of “Mad” Jack Churchill as he […]

Loyalsock Township, Pa. — A couple from Williamsport were arrested last weekend for allegedly stealing copper pipes from a vacant Golden Strip building that will soon be razed to make way for a Chipotle restaurant. James R. Kane, 46, and Cheryl A. Kane, 43, have been charged with felonies of burglary, criminal trespassing; misdemeanor theft, […]