Photo by Tom Rivers: David Macone, a chief thermal technician for AECOM, speaks at a public hearing Monday on the company’s need for compressed natural gas trailers as part of the cleanup of the old site of Diaz Chemical at 40 Jackson St. Mylynda Kubo, the village code enforcement officer, is at left.

HOLLEY – The Planning Board for the Village of Holley has approved the site plan to allow two compressed natural gas trailers at the former Diaz Chemical site at 40 Jackson St.

Environmental services company AECOM, a contractor hired by the Federal Environmental Protection Agency, said the natural gas trailers are needed as a backup heating source as part of the site cleanup.

If used at full capacity, the trailers should be replaced every 3.5 days, said David Macone, chief thermal technician at AECOM.

The trailers would be kept in a fenced area which would be locked. There would be an automatic shutdown if the heat gets too high or there is a malfunction.

Natural gas is needed to heat the ground to 100 degrees Celsius (212 degrees Fahrenheit). AECOM will use piped natural gas for the project. Trailers are a backup if more gas is needed, especially in very cold weather, Macone said. 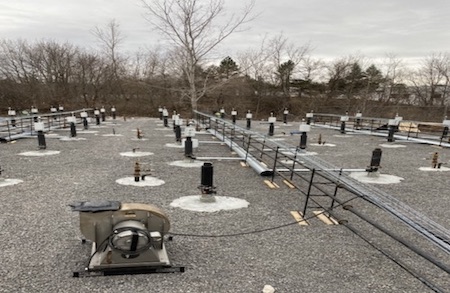 Photo provided: Many heating wells have been constructed as part of the heat treatment project at Holley.

Planning Council Chair Sandy Heise pointed to a letter from Justin Neiderhofer, Orleans County Deputy Director of Emergency Management. He said he supported the project with the natural gas trailers because it would ensure the project runs without interruption. Having the trailers on site doesn’t pose a much greater risk, he said.

The biggest risk is when trailers are swapped. Niederhofer said the trailers are equipped with several safety features to reduce risk.

“The other option would be to not allow them to bring in the trucks and have this soil decontamination process take up to a year longer, thus extending the duration of the overall risk to the community,” he said. wrote Niederhofer in a July 7 letter.

Murray Joint Fire District Chief Harris Reed attended Monday’s public hearing into the natural gas trailers on the property. Reed said he favors the plan because it will speed up the removal of contaminants from soil.

However, he requested that AECOM pay for 30 volunteer firefighters to be trained to respond to an emergency at the site. Reed would like a group of firefighters from Murray, Clarendon, Kendall and Brockport to be trained at Moutour Falls State Academy. He said the cost would be around $3,000.

Macone said he couldn’t give formal approval to that request on Monday without checking with the company, but he expected AECOM to approve the funding.

The EPA has engaged AECOM for the second and final phase of a thermal treatment of contaminated soil and groundwater at the Diaz Chemical Superfund site in Holley.

The system is used to treat the rest of the contamination on site. EPA began building the system in May 2020, using samples and other information obtained during the first phase of processing that used a smaller-scale version of the system.

The EPA treated about 10% of the contaminated soil and groundwater at the site as part of this first phase, which was completed in October 2018.

Thermal cleaning is a $20 million project. That doesn’t include the $12.5 million the EPA has already spent on the cleanup, using Superfund money. The EPA removed buildings, pipes, drums and tanks. Only two warehouses remain from Diaz, which declared bankruptcy and abandoned the site in 2002. The business operated for about 30 years in Holley.

The final phase of treatment targets 1.5 acres of the site and will be carried out in two stages. The heat treatment system is expected to operate for up to four years to clean up the site.

The thermal treatment system uses heat to convert soil and groundwater contaminants into vapours. The vapors will then be captured by extraction wells and treated by a combination of compression, cooling, condensation and granular activated carbon. The system will operate 24 hours a day, seven days a week.

In addition, the EPA will excavate soil from two areas. The excavated soil will be consolidated, heat treated and disposed of offsite, the EPA said in a previous news release. Excavated areas will be backfilled with clean soil. The EPA will monitor the air around the perimeter, monitor noise, and follow a traffic control plan to minimize disruption to the neighborhood.

Once the second phase of operations is complete, the EPA will remove the treatment equipment and restore the property. This will include regrading the site to ensure it has proper drainage and revegetation to prevent erosion.

Approach to compressed air systems according to best practices

The hardest part of starting the journey to efficient and cleaner production (RECP) is taking that first step. The National Cleaner Production Center of South Africa (NCPC-SA) has made the journey to achieve significant resource savings with little investment and sustain them by creating the tools for industrial efficiency. These tools promote the continued application […]

Compressed Air Piping market research report helps business players to focus on target customers and launch products or services according to their requirements. Sales effectiveness, sales coming to market, and visionary ideas are discussed here. It focuses on market classification by type, product, end-user, and region. It shows how COVID-19 has affected major countries and […]

As Europe experiences soaring energy prices and compressed air accounts for between 12-40% of all industrial energy consumed, many companies are considering what steps they can take to minimize costs and improve the efficiency of their operations. According to CompAir, a leading supplier of industrial compressed air equipment, now is the time for energy-intensive organizations […]