It used to be that you had a computer and it did one thing at a time. Literally. You would load your cards or punch tape or whatever and press a button. The computer would read your program, run it, and spit out the results. Then he would go back to sleep until you gave him more information.

Someone clever figured out that the computer might be working on something else while it waits, so you should power more than one program at a time. While program A is waiting for an I/O operation, program B can progress. Of course, if program A didn’t do any I/O, program B would starve, so we invented preemptive multitasking. In this scheme, program A runs until it can no longer run or until a predefined time limit occurs, whichever comes first. If the time expires, the program is forced to sleep a little so that program B (and other programs) have their turn. This is how virtually all modern computers work outside of tiny embedded systems.

But there is a difference. Most computers now have multiple processors and special means to quickly switch tasks. The desktop I am writing this on has 12 processors and each can act as two processors. So the computer can run up to 12 programs at a time and have 12 more that can very quickly replace any of the 12 active ones. Of course, the operating system can also activate and deactivate programs in this stack of 24, so you can run a lot more than that, but switching between the primary 12 and the standby 12 is extremely fast.

So the case is stronger than ever for writing your solution using more than one program. There are many advantages. For example, I took on a program that did a lot of calculations, then spent hours printing out the results. I separated printing to separate tasks on different printers and reduced about 80% of turnaround time, which was almost a day when I started. But even outside of performance, process isolation is like the ultimate encapsulation. The things you do in program A shouldn’t be able to affect program B. Just as we isolate code in modules and objects, we can go further and isolate them in processes.

But that’s also a problem. Presumably, if you want two programs to cooperate, they have to influence each other in some way. You could just use a file to talk to each other, but that’s notoriously inefficient. Thus, operating systems like Linux provide IPC interprocess communications. Just as you make certain parts of an object public, you can expose certain things in your program to other programs.

The most basic way to do this is with the fork call. When you fork a new process, the new process is a full copy of its parent. You don’t always realize this because the next thing you often do is call something like exec to load a new program or you are using a wrapper-like system that calls fork and exec for you. But every time you run, say, ls at the command prompt you run ls program begins its life as a complete copy of the shell. This copy then loads the ls executable and runs it.

What if it wasn’t? This is how my report writer worked. Large calculations, which took hours on a Sequent computer with lots of processors, happened in a single process. At print time I created a bunch of sub-processes. Each had a full copy of the data which I then made read-only and started printing. It is a way of communicating between processes.

Another way is pipes. Imagine a command line like:

Pipes like this are one-way, but you can create named pipes and talk about it both ways. You can do both in the shell — mknod creates a named pipe – but you can also do both in one program. (popen is very easy to use for regular pipes and there is a mknod API call as well.)

There are several other methods you can use to talk through the processes:

You might wonder why you need anything beyond shared memory. Honestly, you don’t, but it’s easier in many cases to use a different method. The problem is that you need a way to have an atomic operation and things like semaphores handle that for you. Imagine if we had a variable in shared memory called busy. Yes busy is 1, then we know that we shouldn’t modify the data in our shared memory because someone is using it.

Sounds awesome, right? No. Somewhere in the CPU, this while loop looks like this:

Most of the time this will work fine. Most of the time. But what if I do TST instruction, then I’m put to sleep so another program can run the same code? Or another processor is executing the exact same code at the same time? It can happen. So both programs will now see that busy is zero. Then they will both fix busy to 1 and continue. It’s a fail.

Semaphores handle this through an atomic access mechanism that allows the program to test and define the operation in one place. There’s more to worry about, like what happens if I wait for process B to release a semaphore and process B waits for me to release another. But this situation – the stalemate – is a subject for the future, along with other pitfalls such as priority inversion. 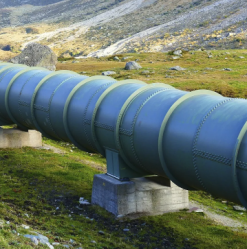 I have a little invented problem. On Linux, if I type df I can discover all the mounted things and their characteristics. But this list includes things like the root directory and the swap file. What if you just wanted to read loop devices and show the same output format? There are many ways to do this, of course. You can read loop files in /etc/mtab and then read other data from /sys or wherever it resides. Seems like a lot of work to me.

Of course, run df almost gets us there. In fact, I could just run a pipeline in the shell to get what I want, sort of:

It works but the output is garbled. On my system /dev/loop3 is first and /dev/loop0 is last and there is no clear reason why number 4 is between 8 and 14. So I want to sort it. Going through sorting doesn’t help much because it will sort alphabetically. You might think of the -n flag for sort, but that won’t work because the number is at the end of the string. Of course, I could use a weird combination of cut or sed to maybe sort it all out, but it’s getting too complicated. Let’s just write some C code.

The first step is to get df to print everything and capture the output. Since we want to process the output, we need to read a pipe, and popen() is an easy way to configure it:

That’s half the problem solved. If you have the characters, you can do all the sorting and filtering you want, but… wait a minute! I’m always lazy. So ask the shell to help us. Here is my plan. I know I only want lines that start with /dev/loop so let’s do this:

And There you go. Yes, you can do it with the shell alone, but it would be a lot harder unless you’re using another programming language like awk and not just using a shell. Also, it makes a great example and there are a lot of things you could do like this that would otherwise be very difficult to do.

You might be wondering if you could create something like sort and both feed it input and read its output. The answer is yes, but not with popen(). the popen() the call is just a convenient wrapper pipe and fork. If you wanted to do both ends, you would have to use the pipe() call directly (twice) then run sort or whatever. But that is a subject for the future.

There are also many other future topics for interprocess communications. But for now try the pipes using popen. Critical sections also appear in shell scripts. If you prefer to write your scripts in C, that is also possible.

“We expect breaks to occur once the weather begins to warm up on Tuesday,” said Williams, according to City Engineer Charles Williams. Jackson residents should insulate all exposed outdoor pipes and faucets, open cabinet doors in the kitchen and bathrooms to help circulate hot ventilation air. Maintaining a small drip from faucets will minimize the […]

Residents of the Isle of Sheppey can expect their water supply to return on Thursday after burst pipes left thousands without water in the hottest week of the year. Two main pipes to the island off the Kent coast burst on Tuesday, affecting 24,000 homes and closing 12 schools. Bottled water points were set up […]

DUBLIN, February 04, 2022–(BUSINESS WIRE)–The “Copper Pipes and Tubes Market” report has been added to from ResearchAndMarkets.com offer. The global copper pipes and tubes market reached a volume of 4.53 million tons in 2021. Looking ahead, the editor expects the market to reach 5.45 million tons by 2027 , posting a CAGR of 3.16% in […]